You are here: Home / Books / What Does Judaism Say About

What Does Judaism Say About 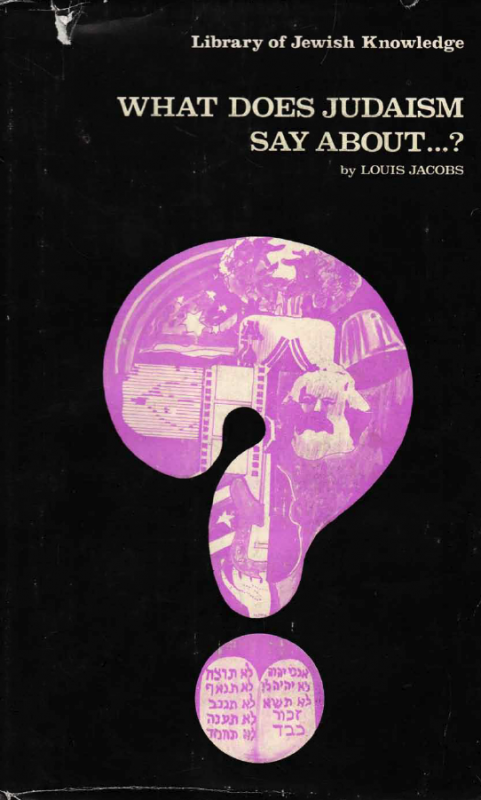 Although the topics in this book are arranged for convenience in alphabetical order, it is neither an encyclopaedia nor a dictionary of the Jewish religion. The aim of this book is limited to the consideration of themes widely discussed in the contemporary world in their relationship to Judaism. Consequently, the subjects are not examined primarily from the point of view of Jewish history. The purpose is rather to see what Judaism has to say now about these issues. With this aim in mind it has been difficult to avoid entirely a somewhat didactic, though it is hoped not a sermonic, form. Most of the topics discussed are also not those one would normally find in a Jewish encyclopaedia.

The major obstacle to any endeavour of the kind attempted here is the difficulty in pinning down the entity called “Judaism.” It is acknowledged that the title: What does Judaism say about …? begs the question in that it assumes that the answer is there to be found. The truth is, of course, that Judaism is not monolithic, with entirely consistent views on all topics. One can only think in terms of a consensus of opinion among the great teachers of Judaism and frequently even that cannot be discovered.

Whether any writer on religion can be entirely objective is a moot point. In a book of this nature he would be wise not even to try. Subjectivity is here a virtue in that it calls attention to the complexity of the ideas found in Judaism so that one man’s conclusions, influenced by his personal predilections, are bound to be different from the conclusions drawn by others. Without this kind of reservation, the exponent of Jewish attitudes toward complicated moral and religious problems soon finds himself speaking of the Jewish view when what he is really putting forward is a Jewish view-his own.

There are many positions about which it can be stated with considerable ease and clarity that Judaism is either for or against them. Judaism is for justice and compassion and it is opposed to idolatry, oppression, and hatred. On such themes as ambition, happiness, infallibility, optimism, and stoicism the answers are bound to be far more elusive. The method adopted here is first to discover whether a given topic has been discussed directly in the classical sources of Judaism or, if not, whether an attitude can be inferred from statements in these sources. The sources may display a variety of opinions on the matter and it is then necessary to try to discover which is the more authoritative. With regard to some problems there are fresh insights arrived at only in more recent times, which render precarious a direct application of the ancient teachings to the new situation. The only approach is to note tendencies and suggestions, avoiding dogmatism as far as possible, and to resist the temptation to write a collection of Responsa. Some topics have been treated in greater length than others, either because of their importance or because there is more material on them in the Jewish sources. For most of the topics comprehensive bibliographies are not available, but the attention of the reader is called to books and articles, especially in English, in which relevant discussions are to be found.

Most of the topics examined are controversial. Their consideration may stimulate further controversy. If it does, so much the better. Easy answers to questions on which men of goodwill are divided are generally bogus solutions. There is much warrant in the Jewish tradition for the view, in the words of Maharal of Prague, that the search for the Torah is itself Torah.

Hard copies of this book can be obtained from Keter Publishing House Jerusalem Ltd.
Preview Book [purchase_link id=”2576″ text=”Purchase” style=”button” color=”blue”]
Membership Options
Become a member and get free access to all the content on this website. Find out more and sign up >
Create your own review
What Does Judaism Say About
Average rating:   0 reviews