You are here: Home / Books / Tract on Ecstasy 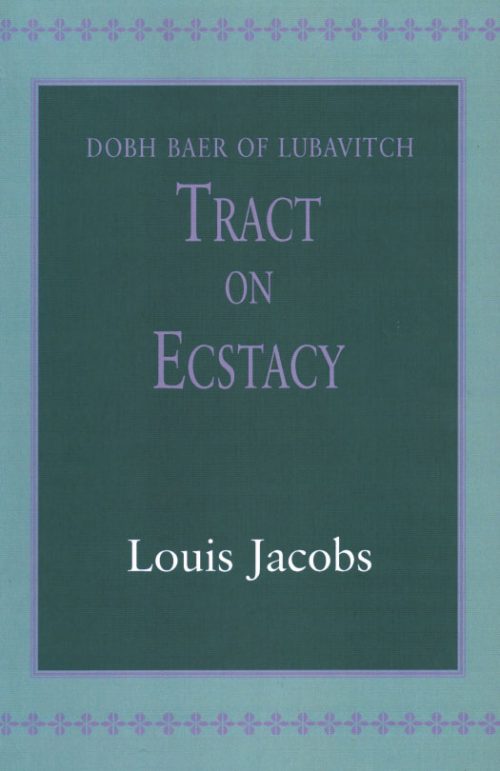 The tract is in the form of a letter, sent by Dobh Baer to his followers, advising them on the role of ecstasy in the religious life. The I:Iasidic movement, founded by Israel Ba’a/ Shem Tobh (d. 1760), known as the Besht, emphasised, among other matters, the value of joy and fervour in the service of God. 3 The Maggid of Meseritch {1710-1772), Dobh Baer, disciple ofthe Besht and organiser of the movement, gathered around him a group of followers who became, after the Maggid’s death, the teachers of I:Iasidism in the various districts of Russia and Poland.

Although a number of these men, like their master, were seasoned Talmudists who could not have been accused of neglecting the claims of the intellect in the life of religion, it remains true, nonetheless, that for most of them I:Iasidism appealed chiefly to the emotions. Religious ecstasy, particularly in prayer, was the good to be cultivated by the IJasid. Contemplation was of value but mainly because of the ecstasy it could induce. Schneor Zalman favoured a different approach, claiming, with some justice, that his was the more authentic interpretation of what the Maggid had taught. In Schneor Zalman’s system, contemplation was a good in itself. The mind was to become engaged in the worship of God. It was to dwell in profound meditation on such matters as His nature, His omnipresence and His relationship to the world, and ecstasy of the heart would follow automatically. l:lasidic legend tells of the gathering of the more famous disciples of the Maggid when the news reached them of his death. Lots were cast to determine which of the disciples was to bathe the limbs of the dead saint in the performance of the last rites. The high privilege of bathing the head fell to Schneor Zalmanl’ lfabad, the tendency in l:lasidism fostered by Schneor Zalman,11 is, then, an intellectual form of a movement highly charged with emotion.

This book is out of print, but please enquire to info@louisjacobs.org.
Preview Book
Membership Options
Become a member and get free access to all the content on this website. Find out more and sign up >

Published reviews of Tract on Ecstacy

Dobh Bear of Lubavitch (1773-1827) assumed the leadership of the Habad on the death of Schneor Zalman of Liady. The tract is in the form of a letter he sent to his followers, advising them on the role of ecstasy in the religious life. He argues that there is no such thing as a depersonalised state of contemplation. Rather, the power and validity of contemplation is to be observed in the degree of ecstasy it induces. Dobh Baer refutes the charge that because ecstasy involves self-awareness it is a betrayal of Habad teaching, and provides a penetrating analysis of the degrees of true ecstasy.

Review of ‘Tract of Ecstasy’ in Zionist Record and S.A. Jewish Chronicle

Review of ‘Tract on Ecstasy’ in World Jewry

The Teachings of the Lubavitcher

Create your own review
Tract on Ecstasy
Average rating:   0 reviews