You are here: Home / Books / Teyku 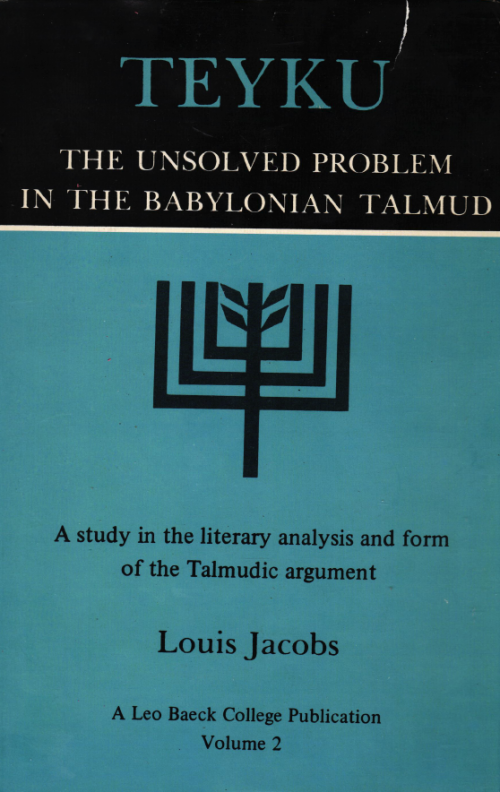 IN THE FOLLOWING pages a phenomenon found very frequently in the Babylonian Talmud is examined in detail. This is the device of TEKYU, of which there are more than 300 instances scattered throughout the Babylonian Talmud but not found at all in the Palestinian Talmud1. Every student of the Babylonian Talmud is aware that an important unit of this gigantic work is the purely academic problem known as the ba’ya (‘problem’). This is set either by a particular teacher (in the form: ‘be’i R … .’, ‘R …. set a problem’) or anonymously (‘ibba’ya le-hu, ‘they set a problem’). The problem is always one of definition. Two possible definitions are presented and these two are so equally balanced that there is no logical reason for preferring one to the other. Consequently, the only way to arrive at a solution is by an appeal to an earlier authority-a Tannaitic source or, at least, an Amoraic source considered to be completely reliable and acceptable. This is introduced by the standard formula: ta shema’, ‘come and hear’. When it can be demonstrated, either directly or by implication, that an established authority has come down in favour of one of the two possibilities the resulting definition is seen to be the correct one, not because it is more reasonable than the other but simply because the authority has decided that this is the proper definition of the law or statement in question. In algebraic form: Let the law or statement be A and the definition either x or y then ba’ya: which correct Ax or Ay? ta shema’: authority states that Ax (or Ay) is correct.

In those instances where no evidence is available from authority the ba’ya remains unsolved. The problem is then not simply without a solution but is inherently insoluble since the two halves are so equally balanced. To express this the term TEYKU is used. More will be said of this in the conclusion but here it must be noted that the correct interpretation of the term TEYKU is that it is an abbreviated form of teykum, ‘let it stand’ i.e. the problem remains unsolved, it ‘stands’ for ever in the state of insolubility. There are a number of important literary problems in connection with the TEYKU phenomenon and these are significant, too, for the whole vexed question of how the Babylonian Talmud came to assume its present form. One of the most difficult problems in the history of Jewish literature is this question of the redaction of the Babylonian Talmud.3 So far as the TEYKU phenomenon is concerned the questions to be asked are: Did the editors of the Babylonian Talmud have before them a series of problems set by earlier teachers to which, in the absence of a solution, they appended the term TEYKU or is the term part of the original unit? Are some teacher more prone to set problems of the ba’ya type and if so why? Can any development be traced in the use of the ba’ya and its TEYKU ending? Are there simple and more complex forms of ba’yot to which the TEYKU ending is given? How much of the ba’ya to which TEYKU is added is the work of the original teacher who is said to have set the problem and how much is due to a later editorial re-working? Why is the phenomenon limited to the Babylonian Talmud, especially since many of the ba’yot to which TEYKU is appended are attributed to Palestinian Amoraim? Is there any evidence of pseudepigraphic material i.e. the attribution of ba’yot ending in TEYKU to particular Amoraim even though these were not, in fact, responsible for the problems attributed to them? What light does the ba’ya phenomenon and its TEYKU ending throw on the general methods of Talmudic argumentation?

The only way to attempt to answer these questions is to examine and analyse in detail every instance of TEYKU in the Babylonian Talmud. In the following pages all these instances will be noted chapter by chapter and tractate by tractate; the final chapter seeking to draw certain conclusions from the investigation. In the process the whole problem of the ba’ya will be considered as well as the more general question of how the Babylonian Talmud was compiled.

Every instance of TEYKU is listed in order. Each text is first given in translation and is followed by a commentary and analysis. The word ba’ya has been translated as ‘a problem’ and the verb be”i as ‘set a problem’. To some extent this anticipates our conclusion that the Talmudic ba’ya is not simply a ‘question’ but a formal problem, even one of a contrived nature.

Every student of the Babylonian Talmud is aware that a significant element in this major work of Judaic exegesis s the purely academic problem known as the ba’ya. The problem is always one of definition; two possible definitions are presented and they are so equally balanced that there is no logical reason for preferring one over the other. Teyku is an abbreviated form of teykum (“let it stand”) – the problem remains unsolved and stands for ever in a state of insolubility. In this book, Louis Jacobs examines in depth this phenomenon of the unsolved problem in the Babylonian Talmud.