You are here: Home / Books / Seeker of Unity 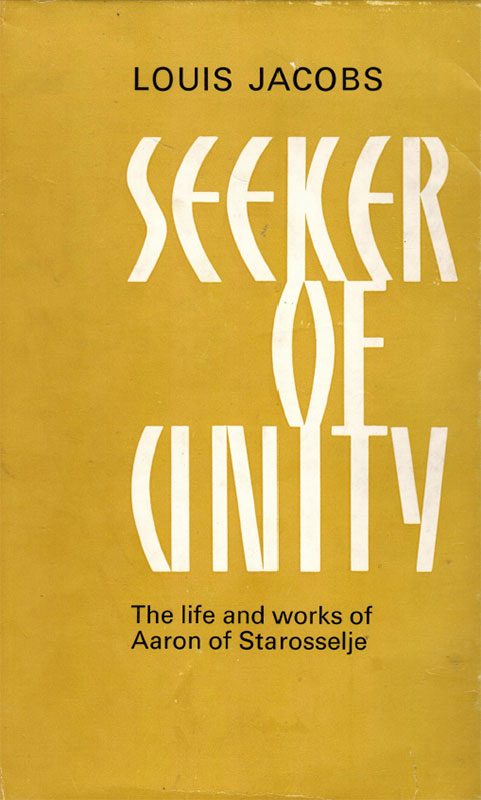 The subject of this study, Rabbi Aaron ben Moses Ha-Levi Horowitz of Starosselje (1766-1828), is a little-known contemplative and Hasidic master, whose thought is of much interest to students of mysticism and religion in general. It has not been possible to avoid the use of the technical terms which abound in his work, but every effort has been made to explain these and keep them to a minimum.

It would have been futile to attempt to understand the thought of an unconventional but orthodox Kabbalist without reference to his Kabbalistic antecedents. To these, Chapters 2, 3 and 4 of the present work are devoted. Chapter 1 is a largely biographical introduction, and Chapter 5 discusses Rabbi Aaron’s general approach. Rabbi Aaron’s works are three in number: Sha’are Ha-Yihud We-Ha-‘Emunah (his philosophy of religion), Sha’are ‘Abhodah (his understanding of the meaning of worship) and ‘Abhodath Ha-Levi (his commentaries on the Pentateuch). Chapter 6 deals mainly with the first of these works, Chapter 7 with the second and Chapter 8 with the third. Chapter 9 is an attempted brief summary of Rabbi Aaron’s philosophy and a consideration of its significance.

In describing Rabbi Aaron’s views it has been necessary to essay the difficult task of extracting, by the use of paraphrase, the kernel of his thought from the intricacies of his Kabbalistic terminology. But, whenever possible, Rabbi Aaron has been allowed to speak for himself through direct quotation from his work in translation. The scheme of transliteration of the Hebrew is the standard one except for words better known in different form, e.g. Kabbalah not Qabbalah.

Published reviews of Seeker of Unity

This book deals with the life and thought of an original but neglected religious thinker who, perhaps more than any other in the history of Jewish thought, grappled with the problems inherent in the idea of God’s unity. Rabbi Aaron Horowitz is generally acknowledged to be the most outstanding, systematic exponent of the profound Habad theory of Hasidism. With the renewed interest in Jewish mysticism in general and Hasidism in particular, this work can serve as an excellent introduction to the more intricate and stimulating ideas of the Movement, normally to be found only in recondite tomes written in difficult Rabbinic Hebrew and therefore beyond the scope of even serious students of the subject. One of the most striking features of the book is the way it demonstrates that there is a close affinity between Habad thought and Far Eastern spirituality. Dr Jacobs has succeeded in bringing a vanished world to life for the modern reader.

‘Panentheist’ – A Review of ‘Seeker of Unity’ by Harold Henry Rowley

Review by Michael H. Newman of ‘Seeker of Unity’

Create your own review
Seeker of Unity
Average rating:   0 reviews