You are here: Home / Books / Pursuing the Quest 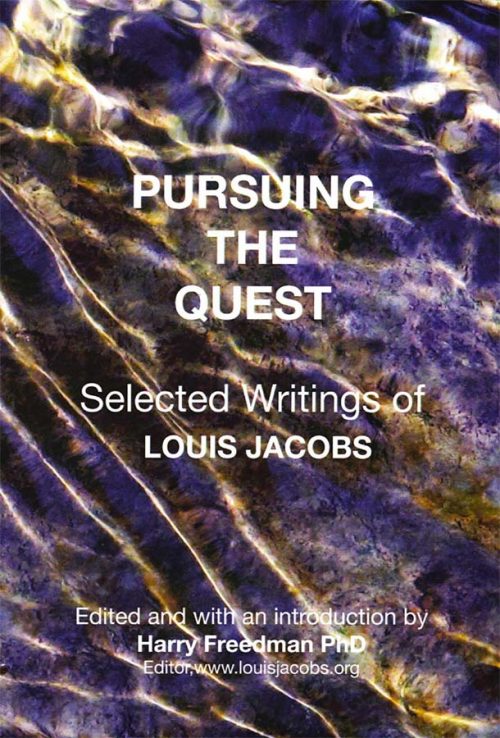 Louis Jacobs is the most important religious thinker to have emerged from the British Jewish community. Born on 17th July 1920, he was educated in Manchester Yeshiva and Gateshead Kollel where he was regarded as an ilui; an outstanding genius of the rabbinic world. His decision to enrol as a student at London University provided him with an additional perspective and it was the combination of intellectual brilliance, Talmudic logic and scientific methodology which was to inform and define his lifelong scholarship.

He married Shulamit Lisagorska in 1944, had his first son, Ivor, a year later and following month took up his first rabbinic position as the assistant to Rabbi Eli Munk at Golders Green Beth HaMidrash; a largely German congregation generally known as ‘Munk’s’. Two years’ later he took up his own pulpit, at the Central Synagogue in his home town of Manchester, where his task was to preach in English, except for the Shabbats before Pesach and Yom Kippur when he was to deliver a sermon in Yiddish. He also delivered a nightly Talmud shiur in Yiddish to the older members of the congregation.

The turning point in his career came early in 1954 when Louis and Shula, now with three children (Naomi had been born in 1947 and David in 1952) accepted the post of rabbi at the New West End Synagogue. The New West End was on the progressive wing of the United Synagogue, adhering to an Anglo-Jewish tradition which included a mixed choir and no public prayers for the restoration of sacrifices. His appointment caused some consternation amongst his former teachers and traditional colleagues; Rabbi Eli Munk writing that he was ‘very stunned’ and that others were ‘flabbergasted’ by his decision to take the job. But it was at the New West End that Rabbi Dr Louis Jacobs was able to fully draw together the twin strands of his rabbinic and secular scholarship and to embark on an intellectual career which was characterised by popular and scholarly acclaim and no small amount of communal controversy.