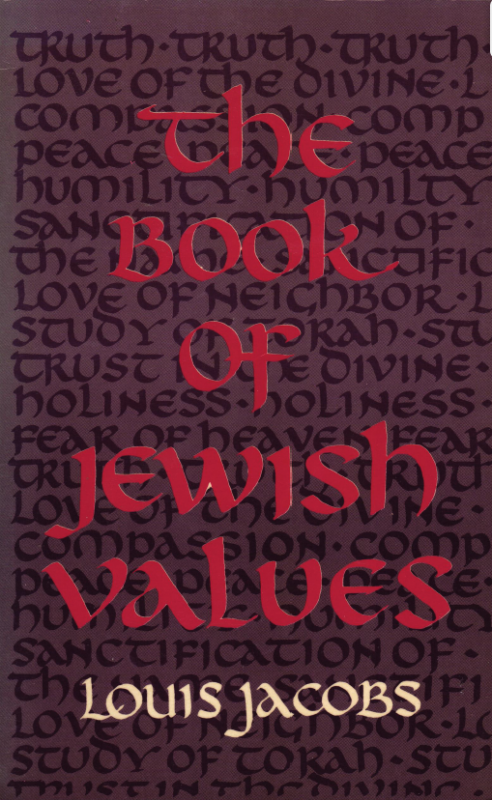 The ideas and ideals set forth in the following pages the study of the Torah, the love and fear of God, the sanctification of the Name, trust in God, holiness, humility, love of neighbour, compassion, truth and peace are Jewish Values. The use of the adjective is not intended to suggest that these values are the invention, or the exclusive preserve, of Jews; still less that they are not to be found among nonJews and in faiths other than Judaism. Basic to all the higher religions are ideals corresponding closely to those described as Jewish. Non-religious, as well as religious, ethical thinkers have expounded the worth of humility, truth, love and compassion, but a Jewish value means: (a) that it receives a special kind of emphasis in the Jewish tradition and (b) that it is no remote ideal but areal, vital force in the lives of Jews.

(a) These values are called Jewish because they receive a special kind of emphasis in the Jewish tradition. Take the word value itself. It is highly significant that the word ‘erekh, used for ‘value’ in the later Hebrew literature, originally meant no more than ‘estimation’ or ‘assessment’ and was used in the earlier sources for the idea of establishing the monetary worth of an object. In the great formative periods of Bible and Talmud there is no word for ‘value’ in the sense of abiding or absolute worth: the ancients saw no value in value. The genius of Biblical and Talmudic Judaism expressed itself far less in abstract thought patterns and far more in concrete applications. There are very few discussions on the nature of justice and righteousness but there are constant appeals for justice and righteousness to be realised in the lives of Jews. Holiness as an abstract ideal is seldom defined but there are numerous prescriptions for holy living. In modern theological language, Jewish thinking on these subjects is ‘existential’ rather than systematic. Similarly, each of the values discussed below is coloured in the Jewish tradition by the typical reactions of Jewish thinkers and teachers who operated within the categories of Judaism. The love and fear of God, for instance, have been variedly interpreted by Jewish teachers but every Jewish interpretation obviously avoids attributing the taking on of human nature by God, as does Christianity, and, on the other hand, refuses to ‘depersonalise’ the Deity, as in the Far-Eastern religions. With regard to some of the other values, the specific Jewish content is less striking. As we shall see when examining the ideal of Trust in God, for instance, the inevitable tensions between quietism and Pelagianism are known to Jewish teachers though they are not discussed, of course, under these names. On the whole it is true to say that in each of the values there are sufficient special Jewish insights to permit the use of the
adjective.

(b) These values are called Jewish because they are no remote ideals but vital forces in the lives of Jews. All the values discussed here have become so deeply-rooted in the Jewish consciousness that they are generally referred to by their original Hebrew names. To this day it is exceedingly likely that even an ordinary Jew with no pretensions to learning will be familiar with the original Hebrew terms. Thus he will use, or, at least know, the term limmud ha-Torah for Torah study, ‘ahabhath ha-Shem for the love of God, yirath shamayim for the fear of God, kiddush ha-Shem for the sanctification of God’s name, bittahon for trust in God, kedushah for holiness, ‘anivuth for humility, rahamanuth for compassion, ‘ahabhath re’a (or more commonly ‘ahabhath yisrael) for love of neighbour, ’emeth for truth, and shalom for peace. This not only demonstrates the force of these ideals in Jewish life, but daily use of the terms by the Jew over so long a period has imparted to them a homely character, making them dynamic principles of action rather than abstract academic ideas and suggesting the warm, pulsating life of the market-place rather than the cold, intellectualism of the schools. However, the more rarefied flights of scholars, saints and mystics cannot be neglected and the following pages attempt to convey not only the day-to-day application of the values but as they are found in Jewish literature as a goal for the few. Although they have received many interpretations, all these are constant in Judaism, and we shall have occasion to examine the particular difficulties of the modern man trying to live by these values. At times these difficulties can be avoided by favouring one ancient interpretation rather than another, but occasionally something more drastic is required such as a completely fresh interpretation. This book is thus addressed chiefly to the reader who finds that the values ‘speak’ to his situation but that some of their ancient interpretations are unacceptable. This must involve a degree of selectivity, the legitimacy of which might be questioned by some who argue that either Jewish tradition is accepted in toto or it is not, and if the right is reserved to select from the tradition, its authority is destroyed by the subjective will as arbiter. But the either-or attitude is naive and unhistorical.

There is no monolithic system of Jewish values but a series of complex applications of Jewish truth in which the more subtle distinctions and shades of meaning were debated at length by the best Jewish intellects. Some selective process is necessary because there are in the traditions many contradictory ideas as well as conceptions which have their origin in conditions no longer obtaining. This does not mean that we can afford to reject ancient ideas merely because they are inconvenient. It is only an attitude of cynical expediency that justifies the ruthless pruning of challenging ideas by labelling them ‘out-moded’. The yardstick to be employed is not that nebulous concept ‘modem thought’ but Jewish tradition itself. All the same, there are problems for moderns, some the result of an outlook owing a great deal to Jewish values themselves demanding a fresh interpretation so that they might be expressed more effectively and with greater relevance to the dilemmas of the present time. We contend that a gap does exist between the values of the past and the spiritual needs of the present but that it is possible to build a strong bridge connecting the two. Those who acknowledge no gap will be irritated by the references to the difficulties of modems. Those who feel that the gap is unbridgeable will dismiss this book and any other effort as futile. But it hoped that there are a sufficient number of thinking people who both see the gap and believe that it can be spanned. This book would not claim that it provides even the raw materials necessary for the important task to be carried out; at the most it is a surveyor’s estimate of part of the work to be done.

Hard copies of this book can be obtained from Hulton Educational Publications.
Preview Book
Membership Options
Become a member and get free access to all the content on this website. Find out more and sign up >
Create your own review
Jewish Values
Average rating:   0 reviews