Belief in a Personal GOD
The Position of Liberal Supernaturalism

TORAH as Divine Revelation
Is the Doctrine Still Acceptable to Moderns? 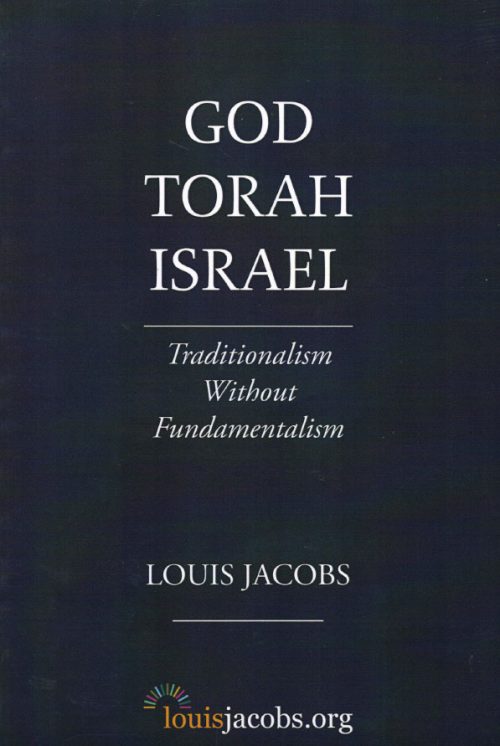 It was with a considerable degree of trepidation that I agreed, at the kind invitation of the Efroymson Committee, to deliver three lectures on the kind of theme of which the talmudic Rabbis suggest silence is golden. That I did, nevertheless, undertake this daunting task was in obedience to that other talmudic advice on etiquette: “Do not be diffident when great men invite you.” The resultant lectures are now presented in print, with fairly extensive footnotes, although the form of verbal communication has been preserved wherever possible.

The position adopted in these lectures is somewhat akin to what German Jewish scholars have called “Orthopraxy” rather than “Orthodoxy” and is that adopted more or less by the Breslau school. I have tried to show, however, that such a position should not result in the attitude that one may believe what one likes as long as the mitzvot are observed. Behaviourism is no substitute for theological thinking. To believe what one likes is a purely emotional response in which the truth content of faith is ignored. A better formulation is to be open to new knowledge and to base one’s belief on this openness without it leading to a negative stance towards the mitzvot. Hence I subtitle these lectures “Traditionalism Without Fundamentalism.”

My thesis in these lectures is that the basic components of Judaism-God, the Torah, and Israel-are best accepted in their traditional formulations and have far greater significance for Jewish religious life in such a framework. On the other hand, I do not believe the Jewish tradition to be infallible. Obviously, in the light of modern thought, whole areas of the tradition require radical revision if congruity with the rest of our present-day knowledge is to be maintained, to say nothing of the question of whether there is such a concept as the Jewish tradition, a “normative Judaism” at the bar of which all truth and all values are obliged to stand. My attempt is to explore the parameters of reinterpretation and to define how far one may step before one proceeds outside Judaism altogether and virtually adopts a different religious philosophy.

Every Jewish theologian, reflecting on how the challenges to his faith are to be met, must achieve a balance between the truth claims of both the old and the new. He is helped by a kind of consensus that has emerged among committed Jews throughout the ages. With regard to Christianity and Islam, for example, it is the consensus of the believing community that has refused to allow anyone to suggest that Judaism’s daughter religions can ever be seen asJudaism through a process of reinterpretation. It is acknowledged that while Jews for Jesus may still retain their halakhic status as Jews, by no stretch of the imagination can they be considered Jews professing the Jewish religion. On another level, I argue that to understand Judaism in naturalistic terms- in which God is the name given to the force that makes for righteousness, in which the Torah is a totally human composition, and in which the Jewish people is not chosen because there is no personal God to do the choosing-is similarly to go beyond the legitimate boundaries of a traditional Jewish theology. Nowadays, however, there is no clear consensus in this matter. Many religious Jews have opted for naturalism and consider the supernaturalistic approach to be reactionary or bordering on the superstitious. Nonetheless, I defend religious supernaturalism, which, I believe, is gradually coming into its own again after its partial eclipse and which to me is the most cogent and convincing picture of Judaism, superior both logically and theologically to its naturalistic rival.

A special difficulty attends on delivering theological lectures in an institute of higher Jewish learning. Not a trace of dogmatism need or should arise in a lecture of pure Jewish scholarship. One can safely leave aside one’s own predilections when discussing the structure of the talmudic sugya or the historical Baal Shem Tov. A lecturer on topics such as these is not required to be personally involved. He need not accept the binding religious nature of the Talmud in the first instance, and there is certainly no need for him to be a Hasid in the second. If he has the knowledge to tackle these subjects, he need not be a Jew at all in order to carry his arguments to a successful conclusion. Theology, on the other hand, by its very nature demands personal commitment. The theologian not only describes what his coreligionists have believed in the past; he proclaims what he personally believes as a current member of the faith community. Complete objectivity is neither possible nor desirable in this area. I must consequently declare at the outset that I believe in religious supernaturalism and am not acting as an advocate for a case I am really convinced is weak. I shall do my best to be fair to the other side and even try to be objective, while trying not to delude myself that such objectivity is entirely possible in matters upon which persons of good will on both sides have strong opinions.

My thanks are due to the Hebrew Union College Press for the great care with which they have seen my book through to publication. I am especially grateful to Barbara Selya for her excellent copy editing and sympathetic understanding.

In these three lectures, Louis Jacobs defines and defends his position as a liberal supernaturalist and halakhic non fundamentalist in those areas where the religious Jew is confronted with the conflicting truth claims of modern knowledge and traditional belief. Jacobs begins by contrasting the theistic belief in a personal God with some of its alternatives; he argues that the liberal supernaturalist’s position is both the closest in approximation to the traditional Jewish view and still the most coherent way to deal with the fundamental mysteries of the universe. The second lecture explores the impact of modern science and scholarship on the doctrine of Torah min hashamayim, divine revelation of the Written and Oral Torah. Jacobs argues that one can be objective without any sacrifice of piety if one accepts the premise that “the totality we call Torah is human imbued with the divine.” Finally, Jacobs discusses traditional interpretations of the doctrine of the Chosen People and examines some of the tensions it generates today in terms of inter-religious tolerance, the Jewish people and the Jewish state, and the demands of the group versus the needs of the individual.