You are here: Home / Books / Faith 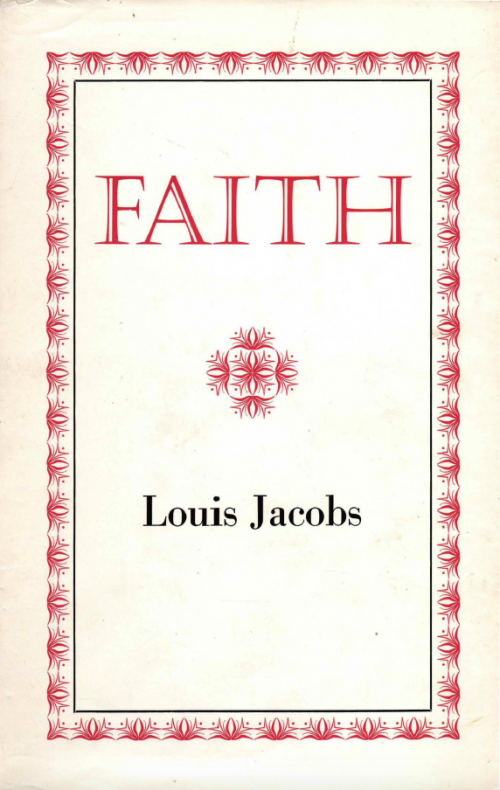 Many books have been written in English on the meaning, nature and life of faith and the problems to which these give rise. It is difficult to assess the extent to which we are today committed to religious belief but there is an obvious interest in religion and in basic religious issues. This book considers belief in God from the Jewish point of view.

The vast majority of contemporary volumes on belief in God are written either from a Christian Standpoint or as a direct reaction to it. Where the author’s background is Christian, naturally the categories used are derived from the Christian tradition. There is rarely a hint that Jewish thinkers throughout the ages have been no less passionately concerned, as sincerely dedicated, as daringly speculative, as their Christian counterparts. On the Jewish side today there is an unfortunate suspicion of theological thinking, which is only gradually allowing serious reflection on the significance of Judaism as a religion.

No Jewish writer on faith can afford to ignore the many extremely able and valuable discussions of faith by non-Jews, or apologise for considering them. The God in whom Jews believe is King of the Universe. The great themes of faith are universal, the concern of all Theists. Nevertheless, the Christian concept of God, insofar as one can speak of a concept of God, is at variance with the Jewish. The insights provided by distinguished Jewish thinkers are vital for the Jew and may frequently also be of help to non-Jewish Theists. Maimonides, as Aquinas, is God-intoxicated and it is unforgivable to imply that Israel, which brought God to mankind, has nothing more to offer on the fundamental principle of Theistic faith.

Jewish thinkers throughout the ages have been as passionate in their concern about the meaning and nature of faith as their Christian counterparts. This book provides a profound but lucid examination of Jewish theological approaches to belief. Of special interest is Dr Jacobs’ critique of the Freudian and Marxist opposition to belief in God.

Is Theology Good for the Jews? – Review by Solomon Goldman

Review by Bruce Findlow in ‘The Inquirer’

The Faith of Louis Jacobs – Review of ‘Faith’