You are here: Home / Books / Ask the Rabbi 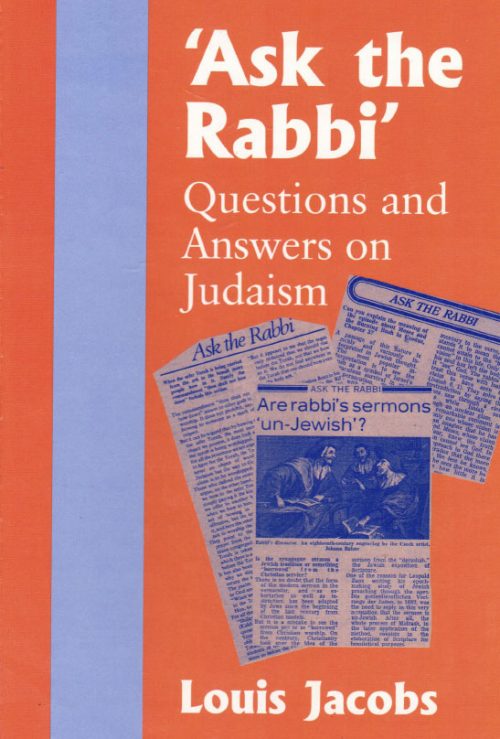 The ‘Ask the Rabbi’ column was a weekly feature in the Jewish Chronicle for some twenty-five years during which time thousands of replies were given to questions sent in by readers. The Editor of the JC, for a number of reasons, thought it best if the identity of the Rabbi was not disclosed. Now that the column has been discontinued, it was agreed that the cloak of anonymity was no longer necessary and that this book be published under my name containing typical replies by ‘The Rabbi’. The replies were published haphazardly as the questions came in so that a reply to a question on, say, dietary law, was printed side by side with a reply or replies to questions on totally different subjects.

Some of the questions required only a brief reply, others a fuller statement. In this book the questions and the replies to them are arranged under various headings – Ethics, Theology, Marriage and Divorce and so forth but, faithful to the spontaneous nature of the originals, no attempt has been made to arrange the replies under the headings in any kind of order.

With the exception of a few questions on the festivals (made up at the request of the Editor and none of which are included in this volume) all the questions were actually sent in by readers eager to know what the Jewish view is on this or that topic. The difference between this book and my books, What Does Judaism Say About…? and the much more comprehensive work, The Jewish Religion: a Companion, lies precisely in my attempt here to reply to particular readers sufficiently concerned to write to the JC for information. Although there is bound to be an occasional overlapping between this and the other two books, I have tried to keep this to a minimum by selecting replies to questions not treated in the other works.

Published reviews of ‘Ask the Rabbi’

The ‘Ask the Rabbi’ column in the Jewish Chronicle was an extremely popular weekly feature of the paper. During more than 25 years, over 1,000 lively questions and answers accumulated, of which this book is a selection arranged according to various themes. It can now be disclosed that the author of the replies was Rabbi Louis Jacobs who, without refraining from expressing his own, occasionally controversial views, presented fairly the Orthodox position as well as that of Reform and Liberal Judaism where this differed from Orthodoxy. This book is a mine of information on the Jewish religion and is also suitable for delightful browsing.

Create your own review
Ask the Rabbi
Average rating:   0 reviews