You are here: Home / Books / We Have Reason To Believe

We Have Reason To Believe

A retrospect of the ‘Jacobs Affair’ by Louis Jacobs
Preface to the fifth edition by William Frankel, CBE
Preface to the fourth edition (Click here to read updated version)
I. Introduction
II. What is meant by God?
III. The proof of God’s existence
IV. Is religious faith an illusion?
V. The problem of pain
VI. The torah and modern criticism
VII. A synthesis of the traditional and critical views
VII. Bible difficulties
IX. The study and practice of the Torah
X. Miracles
XI. The after-life
XII. The chosen people idea and the attitude of Judaism towards Üther faiths
Epilogue
Bibliography 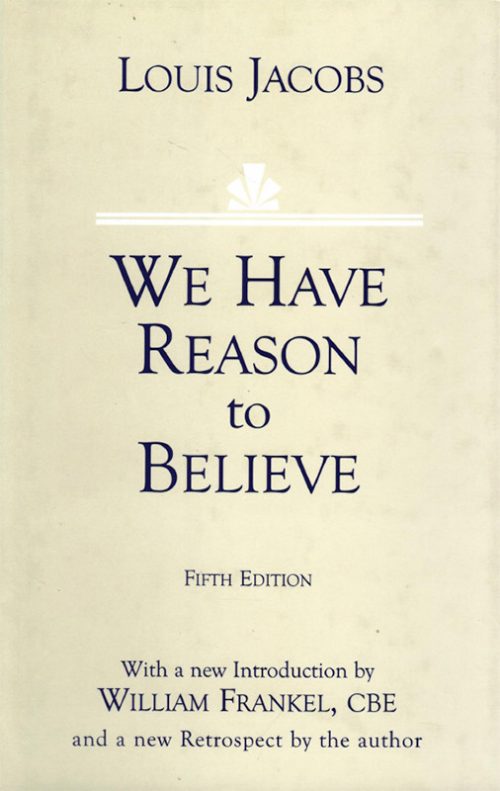 Click here to read the preface to the fourth edition

This book, based on discussions of a study group conducted at the New West End Synagogue, where I functioned as the Minister-Preacher (a quaint title preferred for ‘Rabbi’ by the United Synagogue in 1954 at the time of my appointment), was first published in 1957 by Vallentine Mitchell, of which publishing house Frank Cass was (and happily still is) the director. The book received little attention until the ‘Jacobs Mfair’ of which it was the catalyst.

A second edition was published in 1962, when the early rumblings of the ‘Mfair’ were beginning to be heard. Once the ‘Mfair’ had fully erupted, a third edition was published, in 1965, to which an Epilogue was appended in which I essayed to provide an elaboration and defence of my views. To the fourth edition, published in 1995, a Preface was added containing further elaborations. To the present reprint of this editionFrank Cass has urged me to supply this Retrospect and, although by now I am becoming thoroughly fed up with having to explain and defend my views again and again, for Frank Cass, who has been a source of great encouragement for so many years, to command is for me to obey. This is not, I hope, a mere rehash but a retrospect in which I try, unsuccessfully no doubt, to avoid the element of self indulgence critics have detected in the oft-repeated surveys, forced upon me, when returning to my thoughts in the past.

Here is the place to mention that this Retrospect also takes into account my autobiography, Helping With Inquiries, also published by Vallentine Mitchell, 1989; God Torah Israel – Traditionalism Without Fundamentalism, Hebrew Union College Press, Cincinnati, 1990; and Beyond Reasonable Doubt, Littman Library, 1990. I described the last work as a sequel to WeHave Reason to Believe. I have also treated the theme of understanding revelation in the light of modern thought in other of my works on Jewish theology.

The thesis of the book, for which it was attacked from the right and left, each from its own point of view, is that modern knowledge and scholarship have made it impossible to accept the traditional view that God ‘dictated’ to Moses, word for word and letter by letter, the whole of the Pentateuch (the Torah). My argument runs that, while such a doctrine of verbal inspiration is now untenable, the traditional doctrine that the Torah is from Heaven can and should still be maintained. To put this in different words, God is the author of the Torah (conceived of as the sum total not of the Pentateuch alone but of Jewish religious thought through the ages), but, as in His creativity in the world, He cooperated with His creatures in producing the Torah, through human beings reaching out to Hirn. There is thus a human element, as well as a divine element, in what we call the Torah.

Published reviews of We Have Reason To Believe

This book examines the basic beliefs of Judaism in light of modern thought. Its shape is traditional but not fundamentalist. This book, the main cause of the ‘Jacobs Affair’ in which the author’s appointment to an Orthodox Rabbinic position was vetoed, suggests that the doctrine Torah Min Ha-Shamayyin (The Torah is from Heaven) needs to be reinterpreted so as not to be in conflict with modern knowledge. The controversy erupted again in the 1990s when Chief Rabbi Jonathan Sacks declared that those who hold views similar to the author’s have severed links with the faith of their ancestors.

Review by Bro. P. P. Philip Kantor of ‘We Have Reason to Believe’

Review of ‘We Have Reason to Believe’ by Alan J. L. Jacobs

William Frankel – The Impact of ‘We Have Reason to Believe’

Create your own review
We Have Reason To Believe
Average rating:   0 reviews