You are here: Home / Books / Their Heads in Heaven

Their Heads in Heaven

PREFACE
INTRODUCTION
1 Hasidism: Outline
2 Hasidic Attitudes to the Study of the Torah
3 Hasidic ‘Torah’
4 The Aim of Pilpul According to the Habad School
5 The Derashah of the Maggid on the Two Forms
6 Jacob’s Dream in Hasidic Interpretation
7 The Doctrine of the Zaddik in Elimelech of Lizansk
8 Discipleship in Hasidism: A Study of Two Masters
9 A Pitka from a Hasid to his Rebbe
10 The Book Rahamey Ha-Av
11 A Hasidic Boswell on his Rebbe
12 Honour thy Father: A Study in Hasidic Psychology
13 Eating as an Act of Worship in Hasidism
14 The Zaddik as a Source of Danger
15 The Munkacer Rebbe on Christianity 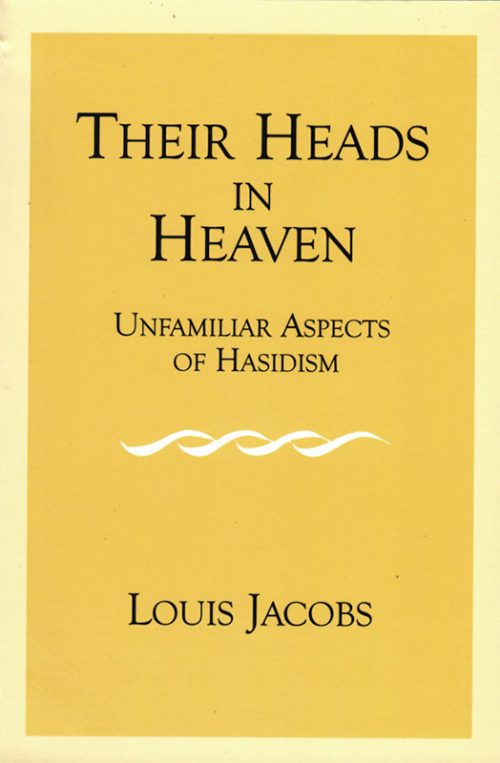 The difference between the philosopher and the poet is that the philosopher tries to get the heavens into his head while the poet tries to get his head into the heavens.’ This saying, attributed to G. K. Chesterton, can be adapted to describe the difference between the great medieval philosophers and the Kabbalists and Hasidic masters. The basic aim of the philosophers was to interpret the Torah by the light of reason, that is, according to the canons of Greek philosophy in its Arabic garb. They believed, of course, that the Torah was revealed truth, but they also believed that in order to understand the transcendent Torah fully, human reason was the indispensable tool. They made many a mighty effort at getting the heavens into their head. The Kabbalists, on the other hand – and they were followed in this by the Hasidic masters- believed that their theosophical system was not only part of the revealed Torah but the supreme part. The divine mysteries had been revealed and so far as these were concerned human reason was powerless except as a tool to apprehend what the tremendous, secret lore was saying. They, unlike the philosophers, were trying to get their heads in heaven, hence the title of this book.

The essays that make up the book were written at different times so that, although they have the above unifying theme, that of heaven-stormers of diverse kinds, each essay (each chapter of the book) can be read on its own. For this reason, the same ideas recur occasionally, though too much duplication has been avoided. It hardly needs stating that my approach throughout is purely phenomenological. I am neither a Kabbalist nor a Hasid but try to be an objective student of mystical phenomena and the mystical approach in traditional Judaism.

The following is a run-through of the themes of the chapters. Chapter 1 provides a brief outline of the mystical movement of Hasidism. Chapter 2 considers the specific attitudes of Hasidism to the study of the Torah. Chapter 3 shows that the Hasidic masters had their own specific Torah. Chapter 4 considers the role of the Rabbinic pilpul in Habad, the intellectual school in Hasidism. Chapter 5 provides an illustration of how Hasidic ‘Torah’ operates, as does Chapter 6 with Hasidic ‘Torah’ on the dream of Jacob. The role of the Zaddik in the influential work of the early master, Elimelech of Lizansk, is the subject of Chapter 7. Chapter 8 takes up the question of the relationship of the Hasid to his Rebbe and Chapter 9 illustrates this by providing a translation with notes of an actual petition presented by a Hasid of the Gerer Rebbe. Chapter 10 treats of a late Hasidic classic which throws light on Hasidic life as it was actually lived by the more devoted Hasidim. Chapter 11 describes a fascinating pen portrait of a Rebbe by his Hasid. Chapter 12 treats of the tensions in early Hasidism between the obligation to obey the fifth commandment and the equally strong obligation to follow the Rebbe. Chapter 13 treats of eating as a special category of worship in Hasidism. Chapter 14 seeks to demonstrate that, for the Hasidim and in certain Talmudic sources, the holy man can be a source of danger as well as goodwill. The final chapter, 15, demonstrates how a very unconventional Rebbe confronted Christianity.

Published reviews of Their Heads in Heaven

Sheds light on obscure corners of the Hasidic movement and the lives of the Rebbes. After a brief account of the history and rise of Hasidism in the eighteenth century to its restoration in the New World after the Holocaust, novel developments, some of them startling, are examined. The book surveys the whole question of the relationship of the Rebbe to his disciples, showing that it was not always beneficial. As a fascinating essay in the book demonstrates, the holy man could be a source of numinous power, bringing danger as well as goodwill.

‘A Rabbi for All Seasons’ by Jeffrey Cohen

Review of ‘Their Heads in Heaven’ by Elliot Cosgrove

Create your own review
Their Heads in Heaven
Average rating:   0 reviews