You are here: Home / Books / The Palm Tree Of Deborah

The Palm Tree Of Deborah 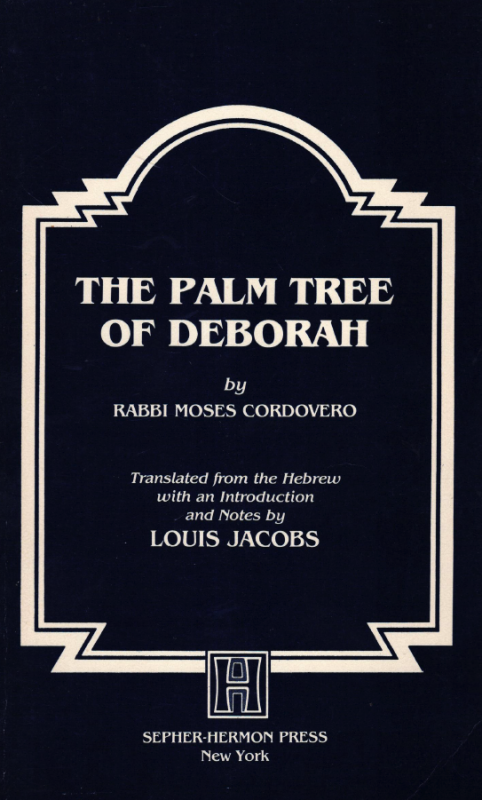 Rirnmonirn (‘The Sweet Juice of Pomegranates ‘), consisting of extracts from Cordovero’s great work, Pardes Rirnrnonirn (‘The Orchard of Pomegranates’); and Mordecai ben Judah Dato, the author of notes to Gallico’s work.

Elijah de Vidas was the author of Reshith H okhrnah, ‘Beginning of Wisdom (Venice, 1578, 1593; Cracow, 1593; Berlin, 1703), a moralistic work in the spirit of the Kabbalah in which his indebtedness to Cordovero is apparent on every page. In fact, the work was intended as a devotional manual, the readers of which would be trained in purity so as to be worthy of studying Cordovero’s Pardes Rirnrnonirn; hence the title, ‘Beginning of Wisdom; i.e., preparation for the study of mystical truth. The book is divided into five parts : I. The Fear of God; li. Love for God; III. Repentance; IV. Holiness; V. Humility, together with a number of supplementary treatises.

Cordovero’s fame, even in his lifetime, spread far beyond the borders of Palestine. The famous Italian Talmudist and Kabbalist, Menahem Azariah da Fano (1548-1620), was proud to call himself Cordovero’s pupil. Cordovero sent da Fano a copy of his Pardes Rirnrnonirn and after Cordovero’s death da Fano offered 1,000 sequins to his widow for her husband’s manuscripts (see J.E. Vol. V, pp. 341-342, and U.J.E., Vol. IV, pp. 245-246).

It is as natural for legends to duster around the lives of saints as adolescent hero-worshippers aroundthe object of their admiration. Isaiah Horovitz, the author of Shene Luhoth Ha-Berith (b. Prague c. 1555, d. Safed c. 1628), writes to his son from Safed: ‘ Three supremely great men lived here at the same time – our teachers, Rabbi Joseph Caro, Rabbi Moses Cordovero and Rabbi lsaac Luria, of blessed memory. They were very angels of the Lord of Hosts. Spiritual mentors from the academies of the prophets and the sages of the Mishnah appeared to them and also Elijah, of blessed memory (see S. A. Horodetzky in Hatekuphah, Vol. XXII, Warsaw, 1926, p. 310, note 1). Cordovero was said to be the reincarnation of Eliezar the servant of Abraham and it is stated that at his death a pillar of fire appeared before his bier and that this was observed by Isaac Luria (C. J. D. Azulai in Shem Ha-Gedolim, s.v. Mosheh Cordovero).