You are here: Home / Books / Studies in Talmudic Logic and Methodology

Studies in Talmudic Logic and Methodology

1 The Aristotelean Syllogism and the Qal Wa-Homer
2 The Talmudic Hermeneutical Principle of Binyan ‘Abh and J. S. Mill’s ‘Method of Agreement’
3 The Talmudic Sebhara in its Relationship to Scripture
4 The Reductio ad Absurdum in the Talmudic Literature 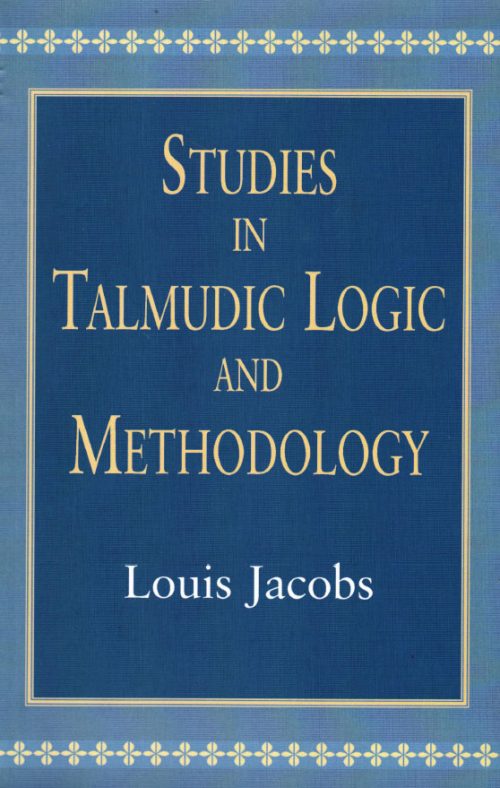 In the traditional Talmudic methodologies the subjects of Talmudic logic and methodology are generally treated together. They share the unhappy fate of almost total neglect by present day students of the Talmudic literature. Talmudists of the old school are content in their attempt to unravel the complexities of the Talmudic sugya and tend to look askance at any kind of systematic approach to Talmudic method. The modem school of Talmudic learning has achieved wonders in delineating the background of the Talmud and describing the historical, sociological, economic and cultural forces which had their influence on the Talmudic teachers. But, with a few notable exceptions, there has been hardly any attempt at a systematic presentation of such matters as the structure of the Talmudic discussions, the formulation of the Talmudic arguments, the division of the sugya into its component parts, the methods of Talmudic reasoning, and the literary style and character of the Amoraic debates.

The present very small attempt to fill the gap does not offer a complete guide to the numerous problems in the field. Its aim is rather to note some of these problems and suggest some tentative solutions. It is hoped that the four chapters on Talmudic logic will shed some fresh light on this difficult subject. In Chapter 1 I have tried to show that the conventional identification of the Qal Wa-Homer with the Aristotelean Syllogism is erroneous. In Chapter 2 I have suggested that the Rabbis, in their investigation of Scripture, used a method that is almost identical with John Stuart Mill’s classification of the ‘Method of Agreement’. Taken in too bald a fashion this would be, of course, grossly anachronistic. My thesis is only this, that the reasoning of the Rabbis led them to discover (over a long process of time) a means of examining Scripture which accords with similar methods used in the investigation of the natural order by modem science. If this is correct the established notion that the ancients knew nothing of Induction will have to be revised. Chapter 3 deals with the Talmudic sebhara in its relationship to Scripture and Chapter 4 with the reductio ad absurdum in the Talmudic literature, both subjects that have, till now, not received adequate treatment. The second part of the book treats of the literary analysis of the Amoraic literature. In Chapters 5 and 6 I have tried to provide the evidence for literary device in the Babylonian Talmud. Chapter 7, the main chapter in this part of the work, hence its disproportionate length, seeks to analyse three sugyoth and draw certain conclusions which, it is hoped, will prove valuable to the understanding of this branch of Talmudics. In the remaining chapters three further sugyoth are subjected to the same kind of treatment. In all these chapters the main thesis is that the Gemara in the form we have now is very far from being a verbatim report of discussions which took place in the Babylonian schools but is rather a ‘contrived’ literary product of great skill, in which the older material used has been reshaped by methods bearing a close resemblance to those of literary artists throughout the ages. Our concern is chiefly with the Babylonian Talmud but the Palestinian is quoted, as well as other contemporary and modem literature, wherever these throw light on the argument.

The somewhat lengthy accounts of various Talmudic passages are necessary for the development of the argument but, in addition, they may be of some assistance to the student with the more limited aim of grasping the meaning of the Talmudic sugya. Expert Talmudists readily admit that the only way to a complete appreciation of a given passage is to see it as a whole and to recognise clearly the place of its detailed parts in the general scheme.

Although the work is presented in the first instance for the consideration of students of the Talmud it may be of interest to the layman who has a desire of gaining a closer acquaintance with the full flavour of Talmudic reasoning. There are few works indeed, even in Hebrew, and hardly any in English, to which such a reader can be referred. Learned theological works, for example, frequently quote from the Talmud, but the reader without first-hand knowledge of the subject would hardly guess that these convey nothing of the essential thrust and parry, argument and counter argument, thesis and refutation, which give the Talmudic dialectic its special form. Quotations from Hamlet are no doubt of value but ‘the play’s the thing’. If we are to understand what Shakespeare is about the only way to do it is to read the play as a whole with the necessary aids. The Soncino English translation of the Babylonian Talmud is, of course of great help here but students generally find the need for some kind of supplementary guide into the intricacies of the debates. It has not been thought necessary to provide either a glossary of technical terms or a list of abbreviations. The more important of those used have been explained in the context, the others will be of little interest to laymen while the scholar will recognise them without aid. The works referred to in the notes will be found helpful for further study. The scheme followed for the transliteration of Hebrew and Aramaic is that of the Jewish Encyclopedia with some slight deviations. A word should, however, be said on the meaning of the term ‘sugyd (plural sugyoth) which occurs frequently. The root of this Aramaic word means ‘to walk’, hence, the ‘lay-out’ of a particular Talmudic passage, a complete unit of the Talmudic debate or discussion, a sustained Talmudic argument in its entirety.

My thanks are due to the Editor of the Journal of Jewish Studies in which periodical a part of this material appeared originally in article form. Since then I have had many opportunities of discussing the questions raised with colleagues and students, to all of whom my thanks are due.

Hard copies of this book can be obtained from this publisher. Find out more from their website >
Preview Book
Membership Options
Become a member and get free access to all the content on this website. Find out more and sign up >
Create your own review
Studies in Talmudic Logic and Methodology
Average rating:   0 reviews