You are here: Home / Books / Principles of the Jewish Faith

Principles of the Jewish Faith 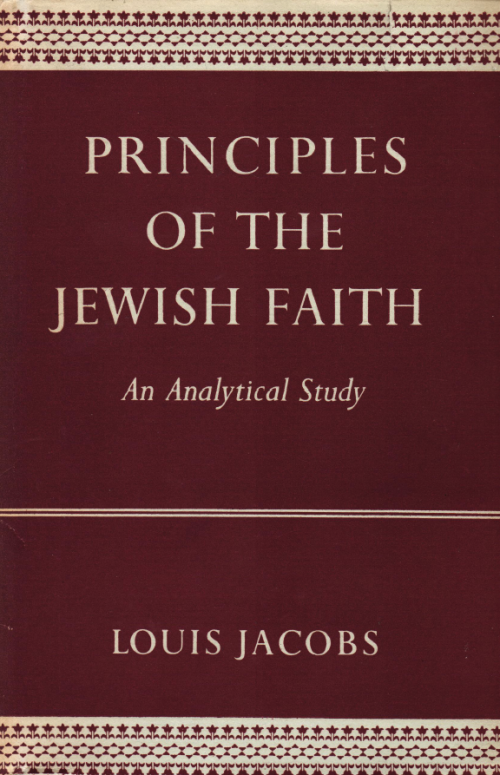 This book is an attempt to discuss what a modem Jew can believe. By putting the question in this way it is not suggested that the twentieth century Jew is necessarily ill-disposed towards religious faith, still less that Jewish beliefs must be watered down in some way and made ‘attractive’ in order to win his grudging adherence. One of the most interesting aspects of present-day Jewish life is the search for a deep and abiding faith on the part of intelligent Jews and Jewesses. It is becoming increasingly evident to such people that Judaism is a religion and not only what is vaguely referred to as a ‘way of life’.

There are, however, obstacles to belief in some of the classic expressions of the Jewish Creed in those areas where the facts about the universe, presented by new knowledge, contradict some of the older formulations. In these areas it is futile to invoke the principle of faith or to contrast it with reason. A complete acceptance of ancient formulations where these run contrary to the facts is a sacrifocium intellectus which the author, and he hopes many of his readers, does not believe Judaism demands.

Nowhere is the conflict between the facts and the older formulation seen more clearly than with regard to Maimonides’ eighth principle of faith – that the Torah is divine. To give up this principle is to abandon Judaism as a religion. But to accept it in the way it is formulated by the great mediaeval sage of Cordova is to tie Judaism down to fundamentalism and obscurantism. This is not, of course, to denigrate Maimonides by suggesting that he was an obscurantist. On the contrary, the remarkably courageous manner in which he grappled with the intellectual problems of his day and his passionate striving for a viable synthesis between what was then the new knowledge and the old, provides sufficient evidence that if Maimonides were alive today and familiar with the range of present-day Bible studies he would face the issues with that same fearlessness. Much of what is presented here is not particularly original.

After all, distinguished thinkers have faced this kind of problem for a long time now and have had many wise and helpful things to say. But, so far as I am aware, no attempt has hitherto been made to present systematically the thirteen articles of the Jewish faith in reinterpreted form. These articles are here considered in the light of the fresh discoveries in the fields of Bible and Talmudic research and in the history of the Jewish religion. The approach is theological but every effort has been made to be true to history. New philosophical trends, particularly existentialism and linguistic analysis, have been considered and, in part, utilised for the purposes of reinterpretation. The author does not believe that the rabbi has any special competence in these fields. He is convinced that rabbi and ‘layman’ (the latter term is, after all, unknown in the classic Jewish tradition) must cooperate in discovering the message of Judaism for our day. When William Temple collaborated in a similar volume in the light of his faith, the contributors were criticised for attempting to provide a hypothetical layman, ‘Mr. ]ones’, with a palatable feast. Temple replied: ‘It was not my aim to provide Mr. ]ones with food. I am Mr. Jones asking what there is to eat’.

The first chapter is introductory. In it the history of Creed formulation in Judaism is considered. Each of the following thirteen chapters deals with one of Maimonides’ articles and treats it from the point of view of the present state of our knowledge. But the opinions of the great mediaeval thinkers are duly noted and discussed. Needless to say, the scope of the inquiry is so vast that it would be pretentious for an author to imagine that he has given all the answers or even asked correctly all the questions. My ambition has been the far more modest one of trying to formulate my own personal faith and presenting the results to interested readers as a basis for further debate and discussion. The final chapter contains a summary of the tentative conclusions reached. The ‘excursi’, which are interpolated throughout each chapter, contain biographical material and elaborations of points raised in the text. In them cross-references from chapter to chapter have been almost entirely avoided, so that there is a duplication of the bibliographies: however, this is an advantage for those readers who wish to study in isolation from the rest of the book.

A word perhaps ought to be said regarding theological thinking. One often hears the claim put forward that Judaism has no theology. If this means that, for the reasons stated in this book, there have been very few systematic and highly organised authoritative statements of what Jews must believe, the claim has much truth. But if, as one suspects, it is put forward as an encouragement for Jews to be unconcerned with theological topics the results of heeding such a claim may well prove disastrous. Judaism is not a form of behaviourism. All the practices of traditional Judaism are buttressed by faith. For the precepts to possess religious value they must be carried out as the Word of God.

The religious position I have tried to sketch in this book is that of modernism within traditional Judaism. In its recognition and acceptance of the Halakhah this position may be called ‘Orthodox’ or ‘Neo-Orthodox’, if the terms are interpreted (as, indeed, they are in some parts of the Jewish world) to cover practice alone. If, on the other hand, the term ‘Orthodox’ is tied to its etymology and is thereby made to cover complete acceptance of the mediaeval standpoint then I am not ‘Orthodox. But a major theme in this book is that the fundamental principles of the Jewish faith have always received fresh interpretations so that the picture of a completely static system of beliefs handed down from age to age reaching back to Sinai is, in any event, false to the facts of history. Judaism, it has frequently been noted, is, if seen with a historical perspective, a dynamic, not a static, faith. For all that, continuity between past and present must be preserved and the eternal values of the faith expressed. How this is to be done is one of the major theological issues in Jewish religious thought. It is unlikely that all religious Jews will ever agree on the correct solution to the problem. Certainly only a visionary will imagine that something like complete agreement will be forthcoming in our generation. But every addition to the discussion brings the solution a little nearer. If this book serves as some minute contribution to the aim all faithful Jews have at heart – the increasing power of Judaism in bringing men to God – the author will be well satisfied.

Published reviews of Principles of the Jewish Faith

All the fundamental tenets of Judaism as expressed in the Thirteen Principles of Faith laid down my Maimonides are subjected to a brilliant, courageous interpretation – a major work.

Review by Alan W. Miller of Principles of the Jewish Faith

Review by Ben Zion Bokser of ‘Principles of the Jewish Faith’

Review by George A. F. Knight of ‘Principles of the Jewish Faith’

Review by Leonard M. Schiff of ‘Principles of the Jewish Faith’

Review of ‘Principles of the Jewish Faith’ by Samuel Sandmel

Sage of London embraces past, looks to future – A review of ‘Principles of the Jewish Faith’ by Kenneth L. Cohen

Create your own review
Principles of the Jewish Faith
Average rating:   0 reviews