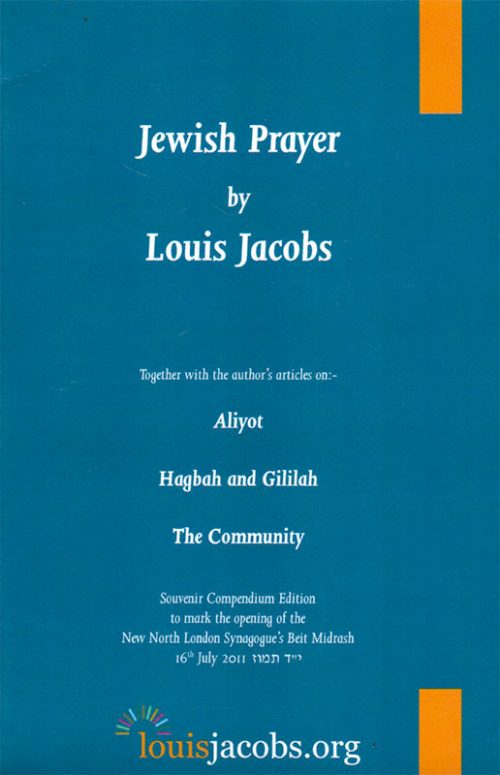 The first book that Rabbi Jacobs wrote was Jewish Prayer. It was a book of just sixty pages, yet as a layman’s guide to the subject it was a wonderful exposition. Originally published in 1955, two years after Louis Jacobs became Rabbi at the New West End Synagogue, the book was written as a response to the need of congregants for an open and stimulating essay that could connect them to the Synagogue and help them gain further meaning in their Jewish life.

The book was well received and was published in several editions with the last one in 1962. Now fifty years later, it is high time another edition was published and what better time than to commemorate the opening of the new Synagogue in Finchley. As Trustees of the newly formed charity whose aim is to publish online every one of Rabbi Jacobs’s articles, we have found Jewish Prayer a source of great strength and value. It remains fresh and relevant, we believe even to an entirely new generation, many of whom may not know that much about the contribution that Rabbi Jacobs has made to understanding Judaism.

Alongside Jewish Prayer we feel it is eminendy suitable to add two short articles on the honours that people receive as part of Synagogue services and a piece reprinted from Rabbi Jacobs’s book Religion and the Individual on community.

We are very thankful to Rabbi Jonathan Wittenberg for not only writing the Preface to this edition but for encouraging the work of the Friends and for ensuring that our approach to Judaism continues and develops.

We very much hope that readers of this special edition will gain as much insight into the subject matter as we have. But we also hope that it will encourage readers to delve more deeply into Rabbi Jacobs’s writing and life by visiting our web site, joining our emailing list, spreading the word and generally supporting the “Quest” for Judaism that Rabbi Jacobs started.

This book is out of print, but please enquire to info@louisjacobs.org.
Preview Book
Membership Options
Become a member and get free access to all the content on this website. Find out more and sign up >
Create your own review
Jewish Prayer
Average rating:   0 reviews