Foreword by Karen Armstrong
Introduction
1. Ezekiel’s Vision of the Heavenly Throne
2. The Four Who Entered the King’s Orchard
3· The Riders of the Chariot and Those Who Entered the Heavenly Halls
4· Maimonides on Being with God
5· The Mystical Piety of Rabbi Eleazar of Worms
6. The Prophetic Mysticism of Abraham Abulafia
7· Responsa from Heaven
8. The Zohar on the High Priest’s Ecstasy
9· The Visions and Mystical Meditations of Abraham of Granada
10. The Communications of the Heavenly Mentor to Rabbi Joseph Karo
11. The Visions of Rabbi Hayyim Vital
12. The Maggid of Rabbi Moses Hayyim Luzzatto
13. The Mystical Epistle of the Ba’al Shem Tov
14. The Mystical Meditations of Shalom Sharabi and the Kabbalists of Bet El
15. The Mystical Experiences of the Gaon ofVilna
16. The Prayer Meditations of Alexander Susskind of Grodno
17. Two Epistles in Praise of the ijasidic Zaddikim
18. The Mystical Accounts of Kalonymus Kalman Epstein of Cracow
19. The Tract on Ecstasy by Rabbi Dov Baer of Lubavich
20. The Secret Diary of Rabbi lsaac Eizik of Komamo
21. Aaron Roth’s Essay, “Agitation of the Soul”
Bibliography
Abbreviations
Glossary
Acknowledgments 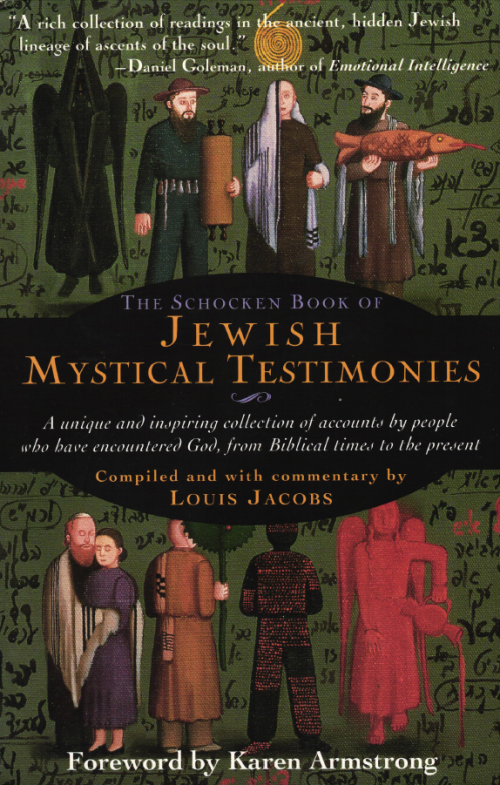 Anyone leading a religious life confronts the task of creating a link between mundane experience and the divine which transcends it utterly. This has been a major problem and a central preoccupation for members of all the great faiths. Whenever they have contemplated the tragic, beautiful world in which they live, men and women have discovered a mysterious dimension that they find difficult to describe or conceptualize. adequately but which gives significant meaning and substance to their lives. This kind of transcendence has been experienced in many ways: it has filled people with dread, awe, joy, sweetness~ and light. As Rudolf Otto explained in his classic book The Idea of the Holy, it is felt to be wholly “other” and yet exerts an irresistible attraction. The religious quest has, in all cultures, been an attempt to give this sacred mystery a local habitation and a name while finding ways in which human beings can apprehend it. One of these ways has been the mystical journey.

Precisely because the divine is ineffable and other, it has always, historians of religion tell us, been experienced in something other than itself. We have created symbols that express-however imperfectly-our sense of connection with God. Earthly realities themselves become numinous redolent of a Reality which, paradoxically, lies essentially beyond them. A symbol can never be the end of the quest. If it is, it becomes an idol. All it can do is introduce us to the divine. Thus God has been experienced in a place, a temple, a sacred text, a law code, or a human being. Most people are satisfied with the common symbols and observances of their tradition. But in all cultures there are men and women who have the spiritual stamina and talent to discover the divine presence in the depths of their own being. Using techniques that are remarkably similar all the world over, these individuals make an interior journey that is also an ascent to a more exalted dimension of existence.

These are the people we know as the mystics and they have surfaced in all cultures and religions, even in the three monotheistic faiths of Judaism, Christianity, and Islam, which are primarily more active than contemplative, more preoccupied, one might think, with the duty of implementing God’s will in the external world than with cultivating exotic states of consciousness. But the mystical vocation is irresistible, even if it is not for everybody. The Talmudic tale of the four sages who attempt to enter the orchard (pardes) shows this clearly. For those who are not so gifted, mysticism is dangerous to body and spirit. But those who are able to embark on this heroic journey will do so, with or without the blessing of the establishment. There has often been conflict between the mystics and their more conventional co-religionists. In the Roman Catholic Church, mystics of the stature of the sixteenth century Spanish Carmelite Teresa of Avila were frequently in trouble with the Inquisition. At a time when the Church was stressing the importance of its authority, the Inquisitors looked askance at men and women who bypassed the hierarchical channels that were supposed to take them to God.

In rather the same way, the Sufis, who were often freethinkers, could fall foul of the Muslim clergy. There was tension, too, between Jewish mystics and the rabbinical schools. None of the mystics concerned thought themselves to be heterodox: they were simply exploring the more interior aspects of the Bible and the Koran, reproducing, as it were, the immediacy of the prophetic or Christological experience that lay at the heart of the faith. Mystics would appropriate the symbols of their own tradition, mine their treasures, and prove their vitality by finding a whole new world of significance in the images of Scripture. Their journeys were shaped by the unique symbolism of their own faith and this inevitably affected their course. This would give Jewish mysticism, for example, its special character. Throne mystics and Kabbalists would find their path to the divine through imagery that was different from that encountered by a Christian or a Sufi. And yet they would often have experiences or wrestle with difficulties that are endemic to the mystical way in all traditions. Mystics will very often have more in common with their counterparts in other faiths than with their nonmystical co-religioriists. This fact makes it particularly rewarding and important to look at the mystical testimonies of different traditions, and is one of the reasons why this anthology is so valuable.

As Louis Jacobs has pointed out, Jewish mystics are more reticent about their experiences than, for example, Christian or Muslim mystics, so it is helpful to have these writings, which do attempt to chart the Jewish ascent to God, made so readily accessible. Besides being an inspiration for Jewish readers, this volume has much to teach people who are versed in the mysticism of other traditions. Where Christian mystics find inspiration in the person of Christ, and Muslims take as their starting point the ascension of the prophet Muhammad to heaven from the Temple Mount in Jerusalem, Jewish mystics have started their quest by contemplating the Throne Vision of Ezekiel, which itself looks back-as Jacobs points out-to the theophany of Sinai. All these great religious symbols speak eloquently of a dramatic divine and the human meet. Mystics in all three faiths have attempted to experience these far-off events in their own lives. As Christians try to unite themselves to the person of Jesus, in whom God was mysteriously enshrined, the Jewish mystic “becomes a chariot” like the one which Ezekiel saw bearing the divine presence (p. 21). In much the same way, Sufis hoped to re~create within themselves that perfect isliim, or “surrender,” which made it possible for Muhammad to hear God’s word and to pass beyond the limits of human perception through the Seven Heavens to the presence of God. The stories of Muhammad’s ascension to the Divine Throne are uncannily similar to the accounts we find in the Heikhalot-literature.

For Jews, the Temple was the place where God had dwelt with human beings, though they realized that there was an incongruity in the very idea of the divine living in an earthly shrine. “Will God really live with men on earth?” Solomon mused incredulously during the Dedication. “Why, the heavens and their own heavens cannot contain you. How much less this house that I have built!” (I Kings 8:26-27). Solomon’s cry expresses the central paradox of the religious experience in all faiths: When one considers the utter holiness of the sacred, any symbol that professes to contain it is bound to be inadequate, whether that symbol is a human being like Jesus or a manmade building such as a temple. The miracle is that God can be experienced and revealed at all. Yet the imagination-surely the chief religious faculty-is able to look beyond the mundane image to the Reality itself. As this anthology shows so movingly, long after the Temple had been destroyed it still continued to shape Jewish spirituality. We see this in the Throne mystics’ gradual progress through the halls of the Heavenly Palace (so reminiscent of the graded holiness of the Temple Courts) and in the Zohar’s depiction of the ecstasy of the High Priest. Indeed, the very notion of the ascent (aliyah) to God attempted by the Jewish mystics looked back to the aliyah of the pilgrims and psalmists when they climbed up the Temple Mount and entered the place where God was. The mystics were aware that any aliyah was, as it were, an “ascent inwards.” It was, as the Ba’al Shem Tov explained, a return to the Source of being, a state symbolized in the Bible in the imagery of Solomon’s Temple and the Garden of Eden.

As Gershom Scholem has pointed out, mystics do not relegate religious events to the past. Certainly they believe in the historicity of Moses, Jesus, or Muhammad. But they also see the inner reality of salvation history as contemporaneous and timeless. It can be appropriated and experienced anew, centuries after the original happening. The Temple might be destroyed, but the kabbalist could still feel what the High Priest experienced when he entered the dark, inaccessible void of the Devir. Even though most Jews regarded the era of prophecy as over, Maimonides and Abraham Abulafia believed that it was possible to attain the rank of prophethood through the mystical disciplines. Sufis, who believe that Muhammad was the Seal of the Prophets, also believe that they can experience his prophetic receptivity to the Divine Word, just as Christians, who regard Christ as God’s Last Word to humankind, believe that Christhood is the true destiny of all men and women. By means of their spiritual exercises, therefore, mystics try to become themselves at one with the bridge that originally spanned the gulf between the divine and this mortal world.

The Schocken Book of Jewish Mystical Testimonies brings together the few accounts we have by Jewish mystics of their encounters with the divine. The sources collected in this volume–spanning two thousand years and including material from Europe, North Africa, and the Middle East–include depictions of peak religious experiences and visions, examples of ecstatic prayer, and counsel on how to keep company with the divine. Supplemented with commentary by Louis Jacobs, one of the world’s most knowledgeable scholars of Jewish mysticism, these accounts offer an exciting new window on Jewish religious experience and inspiration to spiritual seekers of all persuasions.