You are here: Home / Books / Jewish ethics, philosophy and mysticism 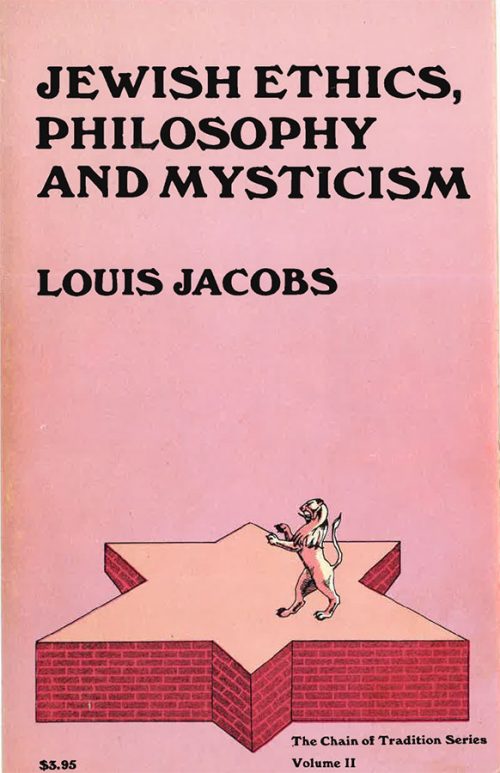 THIS BOOK is divided into three parts: 1) Jewish Ethics, 2) Jewish Philosophy, 3) Jewish Mysticism.
Most of the thinkers represented here belong to the Middle Ages, which in Jewish history must be considered as going to the nineteenth century. Even those who lived at a later period in Jewish history be­long in thought to the Middle Ages. The views of modern thinkers are nol recorded in these pages, not because they are unimportant but because the book is chiefly concerned with presenling a picture of the older tradition. However, where views are expressed which have parallels in more modern writings the latter are generally re­ferred to in the Comments.

The section on Jewish Ethics, dealing as it does with the patterns of human conduct, is not at all hard to follow. Jewish law sought to create a pattern of living for the Jew. The detailed rules and regula­tions found in the sources of Jewish law provide a kind of minimum standard for Jewish conduct. But each Jew is expected to rise above the bare minimum and this is where ethics comes in.

The differences between law and ethics in this connection can be briefly stated: 1) Law, as we have just noted, is concerned with mini­mum standards. Ethics demands something more. For instance, the law forbids the destruction of another’s property. Ethics demands that in one’s conduct nothing is done which, even indirectly and even in cases not covered by the law, can cause unhappiness and distress to others; 2) Law provides rules for all Jews. Ethics is more individual­istic, encouraging each person to realize the best of which he is capable. For instance, the law demands that every Jew must give char­ity but leaves the amount given to the individual. Ethics demands that each individual should be as generous as his circumstances allow; 3) In law the emphasis is on action. Certain deeds are good, others bad. Ethics, though also concerned with action, tends to place the emphasis on the formation of character. For instance, the law com­mands men to be generous to one another and not to steal from one another. Ethics seeks to promote the kind of character which has no desire to steal and which automatically responds to cries of help without being ordered so to do; 4) Jewish law is deeply rooted in Jewish history and experience and is addressed primarily, though not exclusively, to Jews. Ethics is more universal. It speaks to the human being with human needs, hopes and strivings so that its appeal is to all men. For instance, one can find laws which have reference only to Jewish life e.g. Sabbath observance (which has little meaning for non-Jews except insofar as it reminds humanity of the need for periodic rest and relaxation). But ethical demands such as that men should love truth and pursue justice, awaken an echo in the soul of every man and are, indeed, for the guidance of all men.

The sections on Jewish Philosophy and Mysticism are more difficult both because of the more abstract nature of the subjects discussed and because of the technical language used. An effort has been made to avoid the use of too many technical terms in the translation and where these were unavoidable they have been explained fully in the comments.

Both Jewish law and ethics require a ground or foundation upon which to build. They need a driving force, to vary the metaphor. In order for law to promote the good deed and ethics the good charac­ter they must be inspired by a sound philosophy of life. Show me a man’s philosophy, said Chesterton, and I’ll show you the man. Hence the significance of Jewish philosophy as providing the inspiration for the good life by considering such ultimate questions as: what is life’s purpose? why should man be good? what should be man’s relation­ship to God and to his fellow-men? Jewish mysticism is, from this point of view, a branch of Jewish philosophy but with a greater em­phasis on individual experience and a more direct awareness of the divine. The mystic seeks to experience in his personal life those ideas about which the philosopher speaks.

Hard copies of this book can be obtained from Behrman House.
Preview Book
Membership Options
Become a member and get free access to all the content on this website. Find out more and sign up >
Create your own review
A Teacher's Book for Jewish ethics, philosophy and mysticism
Average rating:   0 reviews