You are here: Home / Books / A Jewish Theology

PREFACE
I. WHAT IS JEWISH THEOLOGY?
2. THE UNITY oF GoD
3. THE Via Negativa AND GoD AS Person
4· TRANSCENDENCE AND IMMANENcE
5· OMNIPOTENCE AND OMNISCIENCE
6. ETERNITY
7· CREATION
8. PROVIDENCE
9· THE GooDNEss oF GoD
Io. ExcURsus: THE NAMEs OF GoD
11. THE LoVE oF GoD
I2. THE FEAR oF GoD
I3. WoRSHIP AND PRAYER
I4. REVELATION
I5. ToRAH AND MrrzvAH
I6. JEWISH ETHICS
I7. SIN AND REPENTANCE
I8. REWARD AND PUNISHMENT
I9. THE CHOSEN PEOPLE
20. PEOPLEHOOD AND STATEHOOD
2I. JUDAISM AND OTHER RELIGIONS
22. THE MESSIANIC HOPE
23. THE HEREAFTBR
BIBLIOGRAPHY
INDEX 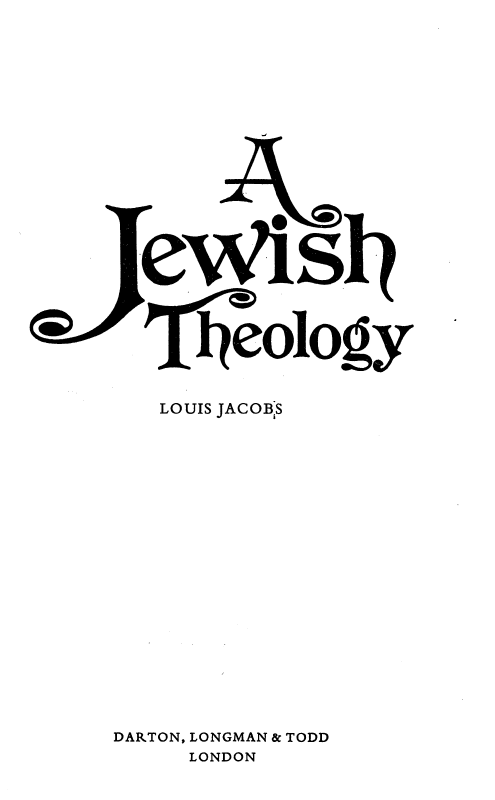 THIS book attempts a systematic presentation of the main themes of Jewish theology. Kaufmann Kohler’s pioneering work in the field Jewish Theology: Systematically and Historically Considered, was published in 1918 (re-published by Ktav in 1968) and is now out of date. Samuel S. Cohon’ s Jewish Theology, published posthumously from an incomplete manuscript, was evidently compiled in the main a long time ago and now has the same dated air as Kohler’s work. Many Jewish thinkers have written on theological topics since Kohler but there is a real lack of systematic treatment which this book seeks, however inadequately, to fill. The material presented here has not been published before except for some passages which have appeared in other books of mine (especially Principles of the Jewish Faith, which covers some of the same ground) and in the column I wrote regularly for the journal Judaism. The passages in smaller type in the body of the text contain more technical details and fuller bibliographical notes. If the reader wishes to.skip these he can do so without detriment to the argument.

The first chapter of this book surveys the attitudes towards theology in the contemporary Jewish scene and argues for a more positive approach to this important branch of Jewish thought. That there are serious obstacles to the working out of a viable Jewish theology is not to be denied but this should not prevent us from making the effort, always with the proviso that the results are put forward with no exaggerated claims as to their significance. The subjective element must frankly be recognised; the attempt being seen as a Jewish theology, a possible statement, acceptable to some minds, unacceptable to others. Tentativeness is a virtue in theological thinking and if speculation is the more suitable word so be it.

The idea of a quest for the Torah is basic to the book’s approach. For all its conviction that theology is important and wedded though it is to the attempt-foolhardy some would say-at systematising Jewish beliefs, it acknowledges, as we all must, that theological problems, or, for that matter, any other problems of significance to the way men live, are not solved within the pages of the books. But there is a grand Jewish tradition of Midrash, the root of which word means, after all, “to search”. The search itself belongs to the life of religion as conceived by Judaism. In the old tale, when the dervish repeatedly entreats Allah to say: “Here am !” Allah eventually replies that He had already done so in the dervish’s very quest.

This book is out of print, but please enquire to info@louisjacobs.org.
Preview Book
Membership Options
Become a member and get free access to all the content on this website. Find out more and sign up >

Published reviews of A Jewish Theology

A systematic, chronological study by one of the world’s leading Jewish theologians. A masterly guide to the major currents of Jewish thought.

‘Orthodox, with reservations’ – A Review of ‘A Jewish Theology’ by Geza Vermes

A Review of ‘A Jewish Theology’

A review of ‘A Jewish Theology’ in The Tablet

Charting the Map of Jewish Theology – A Review by Jacob B. Agus

Review by R. J. Zwi Werblowsly of A Jewish Theology’

Review of ‘A Jewish Theology’ in The Month

The Modernism of Louis Jacobs – A Review by John Rayner

Create your own review
A Jewish Theology
Average rating:   0 reviews